FORUM magazine remembers the contributions of John Graham IV, an inspiration to many. John Graham IV, FASAE, CAE, former President and CEO of ASAE, was a mainstay in the association world for more than 40 years. His recent passing, after an extended battle with cancer, has saddened the greater association management community.

Graham joined ASAE in August 2003. In his time with the organization, he oversaw incredible growth, more than doubling ASAE’s membership, along with leading the charge on a variety of innovative and progressive initiatives that would position ASAE as a true leader in the industry.

Prior to his tenure with ASAE, Graham was part of the American Diabetes Association (ADA) for 24 years, serving as their CEO for the last 13 of those. He also worked for the Boy Scouts of America for nine years before joining ADA. In May 2015, he was honored and recognized as a Distinguished Eagle Scout for his contributions to the organization.

Graham’s résumé only scratches the surface of his contributions and dedication to the industry. His passion for his initiatives helped define his goals for the community: bringing people from all backgrounds together and showing the world why associations are so important to society.

Most notably, Graham invested heavily in ASAE’s Diversity Executive Leadership Program (DELP). The mission of this program is to support individuals from underrepresented identity groups in their advancement into the ranks of association management leadership. The two-year program has many goals, most notably:

Graham spent years growing the program, according to Pat Blake, FASAE, CAE, CEO, Heart Rhythm Society. She remembers his work with DELP as influential. “The program was near and dear to John’s heart,” she says. “Every initiative needs a champion who is passionate about its success and longevity. The DELP program embodies diversity, equity and inclusion, and John’s efforts certainly contributed to its continued success.”

Michelle Mason, FASAE, CAE, President and CEO, Association Forum, echoes these sentiments, saying Graham’s work provided opportunities for those who were ignored previously. “The DELP program has set the stage for so many professionals to go on to achieve and accomplish their goals in the industry, many of which would not have been realized if not for the work of John. He knew this, and today we are dedicated to creating a welcoming environment for every association professional.” 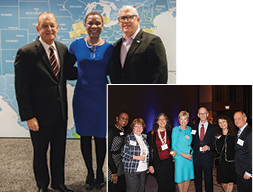 Graham’s intense focus on diversity and inclusion was key to the sentiment picking up steam in the association world. “You can’t take your eye off the ball,” Blake adds. “John knew that, and that’s why I think he’ll always be remembered for his efforts to make association management accessible for all.”

Graham was also invested in the expansion of associations both nationally and internationally. “He believed that associations touch so much of the fabric of society,” Mason says. One prime example is his Associations Advance America campaign, which later evolved into The Power of A initiative that we see today. The message was simple yet extremely important: Associations help advance workers’ skills and create new employment opportunities, in turn making America and its economy stronger.

His advocacy of associations across many channels, including legislatively, provided a launchpad for the industry to become recognized as a valued contributor to the economy and workforce.

“John believed that the association profession made a difference,” Blake says. “Both nationally and internationally, he thought that because associations exist and because of the work we do, the world was a better place.”

Throughout his career, many association professionals credit Graham with impacting both their professional and personal lives. For Mason, meeting Graham changed the trajectory of her career. “When I first met John, I was on staff with ASAE as an associate manager of research. Having the exposure to a leader like John so early on in my career was really a milestone moment for me,” she says. “He was very professional, engaging, smart and definitely passionate about his work in the nonprofit sector.”

For Mason and many others, Graham was an influential mentor, helping shape the minds and careers of countless association professionals. Paul Pomerantz, FACHE, FASAE, CEO, American Society of Anesthesiologists, notes that Graham helped him start his second career in the association management world. “I was at my first association job and was trying to figure out which way was up,” he says, “and he was incredibly warm and friendly. As the new guy in the industry, I was nervous. But he made me feel right at home.”

Blake says that she didn’t ask for much advice from Graham over the years, but there came a point when she began to think about a scenery shift in the industry. “The first person I called was John,” she says, “and I told him I didn’t even know where to begin. He told me to start ‘putting a bug’ in a couple of well-placed people’s ears. Before I knew it, John had already done that for me, reaching out and helping me get the interview for the position I still hold today.”

Not only was Graham’s extensive network impressive, but his personality was contagious and set him apart from others in the field. “He had an engaging sense of humor and a very distinctive laugh,” Pomerantz continues. “He was so concise and articulate. When he conceptualized an idea, he delivered it crisply, where you learned something from virtually everything he said.”

With the passing of such an influential figure, it’s important to not let the personal, more intimate memories fade.

For Pomerantz, one lasting memory he has of Graham is the post-meeting or event extracurriculars, usually involving long and deep discussions over a few drinks at a bar. “He would always have the ‘John Table,’” he remembers. “But it wasn’t an exclusive table at all. Whoever was at that meeting or event was welcome.”

More and more chairs would be added to the table, sometimes growing to as many as 20 attendees, all gathered around Graham, listening to his advice and striking up conversations about the intricacies of the industry. “He would always have his signature drink, a glass of Johnny Walker Red scotch—what I would call beginner’s scotch,” Pomerantz jokes. “He was usually the last one there, closing down the bar. But he’d always show up in the morning for the next session as sharp as a tack.”

Graham’s kindness stretched beyond the professional world, as Blake recalls. “My husband was diagnosed with cancer,” Blake says, “and the first question John would ask me every time he would see me was, ‘How is your husband doing?’ That meant a lot to me. Of all the people that John knows, all the issues he hears about and all the personal information he gets told, he never forgot to ask. John always cared.”

For Mason, the experiences she shared with Graham would never leave her. “We had moments where we were communicating as mentor-mentee, but we also had interactions where we were competing in the same market,” she remembers. “I came out of those conversations much stronger as a result. Even in the moments when things were more tense, he was always teaching me how to be a better leader.”

Graham was one of the true giants in the association management world. The memory of Graham will be a lasting one for all who spent time with him, and his influence will continue to impact professionals and the industry for years to come.

Contributions may be made in Graham’s memory to organizations that were particularly important to him, including: