Branching Out to New Revenue

Membership in associations is strong, but organizations will need new sources of non-dues revenue to remain relevant. The year was 1999, and a new millennium was about to dawn. When it did—at the stroke of midnight on Jan. 1, 2000—chaos would ensue, and the world would unravel like a sweater with a fatal snag. At least, that’s what doomsayers predicted. Because of the way computers had been programmed to record dates, they believed machines everywhere would interpret the year 2000 as the year 1900, causing networks to crash en masse, bringing down with them financial systems, power grids and even airplanes in the sky.

Of course, the world did not end in the year 2000. But something else did: software. Not because of Y2K, but because of software executive Marc Benioff, who in March 1999 established the company Salesforce inside a one-bedroom apartment in San Francisco. Benioff and his co-founders declared the “end of software” when they launched their cloud-based customer relationship management (CRM) platform, which lived on a website instead of a hard disk. Traditional “on-premises” software was expensive to install and support, was slow to implement, required copious infrastructure and was updated at a snail’s pace. So-called “software as a service” (SaaS), however, could be implemented, scaled and updated quickly, easily and affordably, thanks in part to an entirely new revenue model based on subscriptions rather than licenses.

Although it seemed radical at the time, the value proposition was undeniable. Twenty years later, most enterprise applications are SaaS-based. On-premises software didn’t stand a chance.

Associations in 2020 look a lot like software did in 1999: Although they’re valued, vital and growing, many of them also are slow, stale and ungainly. In order to remain viable in a changing world, they must go the way of software by finding new, better ways to do the things their members rely on them to do—and a new revenue model with which to support them.

Membership in associations is strong. In the 2019 edition of its Economic Impact on Associations Study, McKinley Advisors reports that member retention rates have reached their highest level in more than a decade. Marketing General Incorporated (MGI) is similarly upbeat in its 2019 Membership Marketing Benchmarking Report, in which it states that 45% of associations have seen membership increase, while only 26% have seen it decrease. Because members are the financial and existential bedrock of associations, that’s good news.

And yet, storm clouds loom, according to MGI, which says 75% of association members are age 40 or older. If demographic trends hold, associations can no longer afford to rely on membership dues in the long term, even if membership surges in the short term.

“Membership has been the main revenue driver for a lot of associations because for a long time it was consistent,” says Tyler Eble, vice president at Association Development Solutions (ADS), a Naperville, Illinois-based fundraising consultancy for associations. “You could plan on it and project it out, but it’s becoming way more difficult to do that now. Younger generations have different values and priorities. A lot of young people don’t even understand what an association is. So you have to turn to non-dues revenue streams in order to supplement potential losses.”

Associations’ survival depends on non-dues revenue, echoes Sheri Jacobs, FASAE, CAE, president and CEO of Avenue M Group, a Chicago-based marketing research and consulting organization that specializes in association clients. “If its main source of revenue starts to dry up, or if changing trends suggest it may not be around for much longer, an association must be prepared to pivot and change its business model,” she says. “Not in the future, but right now.”

If its main source of revenue starts to dry up, or if changing trends suggest it may not be around for much longer, an association must be prepared to pivot and change its business model. Not in the future, but right now.

“The status quo doesn’t exist anymore for associations,” Eble says. “That’s a good thing because it has caused leadership to really think about how they’re going to change with the times and create new programs that can help them stay relevant.”

In that way, non-dues revenue is as much about innovation as it is diversification. In fact, associations that have seen increases in membership are significantly more likely to indicate that their organization has a culture that supports innovation, according to MGI.

That rings true to Terrence Sykes, MBA, chief development officer for the Emergency Nurses Association (ENA) in Schaumburg, Illinois. In 2016, his organization appointed a new executive director, Nancy MacRae, for whom innovation is a major strategic priority. Under MacRae’s leadership, ENA has accelerated its development of new programs and, as a result, increased its non-dues revenue by 25%, from $20 million in 2016 to $25 million in 2019.

“In recent years we’ve made a really conscious effort to grow non-dues revenue in a way that has been very targeted and very intentional,” explains Sykes, who says membership dues account for only 18% of ENA’s overall revenue. “Nancy has been a driver around that. Because of her, we’re a much more nimble organization today than we used to be.”

At innovation-minded organizations like ENA, the secret to growing non-dues revenue is acting more like a software company than an association. The latter typically uses a waterfall-based approach for project management; because associations move step by step through the product development process, they often take months, or even years, to conceptualize and mitigate risks before new programs see the light of day. Software companies, on the other hand, take an agile approach to project management; they work in iterative sprints to quickly launch a minimum viable product that they can subsequently improve and expand based on user feedback.

“A lot of organizations are willing to stay in creation mode forever, but our philosophy is: We’re going to pilot, we’re going to assess and then we’re going to execute,” Sykes says. “We’re not afraid of failure, and that allows us to create new products quickly.” 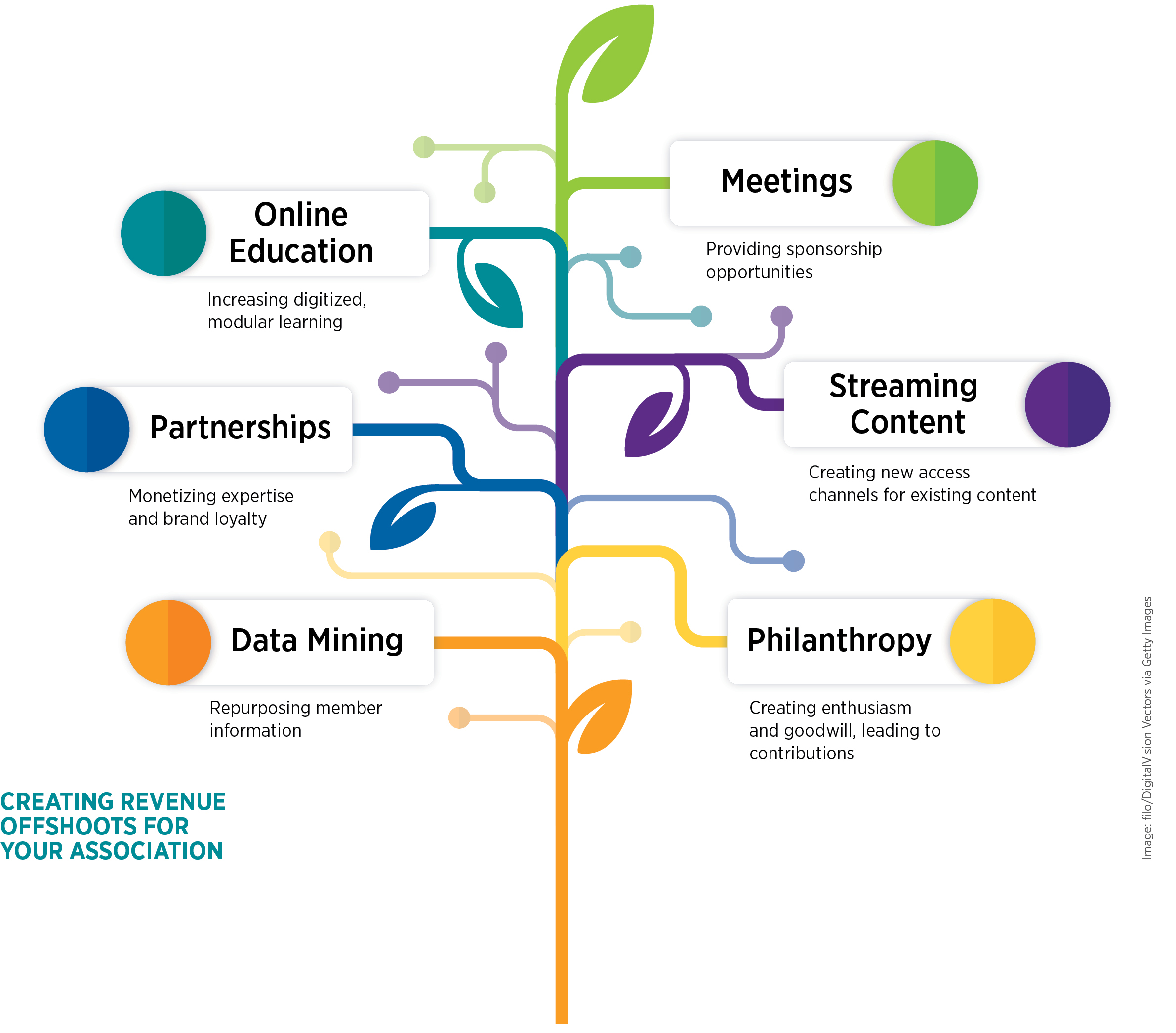 An agile approach can make associations faster and more responsive in the face of threats and opportunities. But speed alone won’t help associations grow their non-dues revenue.

“Organizations have to understand what their members want, and what their industry or profession needs,” Eble says. “Because you can create a lot of great programs, but if it’s not what people are looking for, nobody’s going to invest in them.”

For associations that want to widen their non-dues aperture, a good first step is to conduct an assessment of their member needs that marries membership feedback with market research.

Because every organization is unique, no two should reach exactly the same conclusion. Associations’ shared DNA, however, means there are opportunities with universal appeal. Among them:

Speaking of data, it’s the key to change management, according to Sykes, who says associations must be willing to prune their portfolio to achieve optimal non-dues revenue. Although that might mean establishing new products, it also could mean retiring old ones—a hard pill to swallow for association boards, whose members often have emotional connections to legacy offerings. Hence, data.

“At the end of the day, members still need the same things they needed 50 years ago: They still need to grow their business, advance their career, make money, learn new skills,” Jacobs says. “Those key drivers existed yesterday, they exist today, and they’ll exist in the future. What needs to change is how associations deliver those benefits, so they align with today’s market forces.”

Matt Alderton is a freelance writer in Chicago. What Associations Should Know — and Do — About the Great Resignation

Attracting and retaining workers isn’t all about money right now. Flexibility, workplace culture and other... Mergers and acquisitions aren't just for the corporate world.